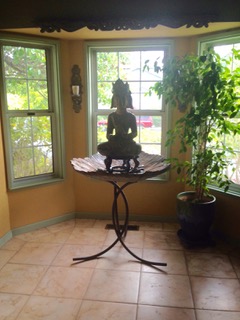 I grew up in a family with a psychiatrist/ psychoanalyst father and clinical psychotherapist mother.  At the dinner table my siblings and I would compete about the correct diagnosis of my father’s anonymous patients.

One of my sisters eventually became a psychiatric social worker and married a psychiatrist.  The other became a clinical psychologist.  I married a Jungian analyst.  (No, my two children have not followed in the field.)

As a young adult, I went into classical (three times a week) Freudian psychoanalysis to treat my own depression and anxiety.  After nine years of feeling worse, I vowed never to become a psychiatrist.

Finally in medical school, (and despite all protestations), I realized that psychiatry was the one rotation where I actually got to talk to my patients about their feelings, not just their livers and lab results!  I could empathize with so many of them; because I, too, had experienced my own suffering.

Ultimately I promised myself that I could become a different kind of psychiatrist than the ones I had gone to:  Unlike them, I wanted to integrate the mind, body, and soul of my patients from a caring place. Meanwhile, I had the great opportunity of working with several wonderful, empathic clinicians, who were not only healers, but great teachers for me.   Since then I have been in private practice in the Bay Area, (with an office in Novato, but currently using telecommunication) for 38 years.

I wanted to integrate the mind, body, and soul of my patients from a caring place

I wish you all safety and peace.